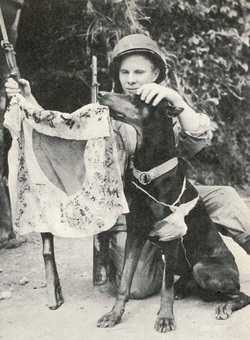 The U.S. Marine Corps has reason to be proud of its K-9 Dog Corps, the "Devil Dogs" six dogs, four of them Dobermans, were cited for their work in the South Pacific. These dogs "Hit the Beach" with the Marines.


In the 1940's when Doberman Pinschers became war dogs - Devil Dogs - they were a new breed to most people in the United States. Dr. William W. Putney, Marine Corps Veterinarian and Captain, had never seen a Doberman when he graduated from veterinary school, nor had most of his colleagues. Wherever the Marine Devil Dogs went, they attracted the curious attention of people who had heard about the sleek and powerful breed but never had seen them. On Guam, the people who lived through the Japanese occupation remember the Devil Dogs as "The Dobermans" or "Ah, The Dobermans" because they remember how valuable they were in the liberation of their island home. 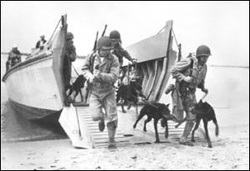 The Marines landed on Bougainville, the largest island in the Solomons, on November 1, 1943. The 24 canine members of the First Marine Dog Platoon was sent ashore just one hour after the first Marines hit the beach, under heavy mortar and rifle fire and were dispatched to various companies according to prearranged plans.

The First Marine Dog Platoon consisted of 48 enlisted men working in pairs as handlers for the 21 Dobermans and three Shepherds, plus six enlisted instructors and headquarters personnel. It was under the command of First Lieutenant Clyde A Henderson, a Cleveland high school teacher, who had been a Doberman fancier and amateur trainer for a decade before the war.

Because of the Dobie’s keen sense of smell and hearing; they could detect the presence of men several hundred yards away. In one instance, the dogs detected the presence of Japanese troops one half mile away.

No unit protected by one of the dogs was ever ambushed by the Japanese or was there ever a case of Japanese infiltration.
It wasn’t until the third day of fighting, D plus 2 day, that the Japanese began firing at the dogs, Caesar, who carried the first war dog message of the war, was hit twice.

During the battles, the dogs led infantry points on advances, explored caves, pill boxes, dugouts, and scouted fortified positions. They did sentry duty with military police at crossroads day and night. They occupied foxholes in forward outposts at night.

They and their handlers were officially credited with leading three hundred and fifty patrols during the mop up phases of the battles. The handlers accounted for over three hundred enemy slain. Only one handler was killed on patrol.

Andy With One Of His Handlers, Private John B. Mahoney, Bougainville.


The most outstanding incident of the First Marine Dog Platoon's record on Bougainville came on November 14, with Andy (a Dobie) and his handlers as the principals. Andy was the Doberman who had led the Raiders inland on the first day: he was popularly referred to as "Gentleman Jim" because of his aristocratic demeanor and aloofness with the other dogs.

A Marine force up front ran into stiff Japanese resistance that day of the action. Andy's two handlers, Privates Robert E. Lansley and John B. Mahoney, volunteered to take their Dobermans and seek out the enemy strong points.

They had complete faith in Andy's ability to spot whatever was out there. The three moved beyond the lines into the heavy foliage. Andy was about 25 yards out front, when he stopped short; and looked to the left and right, the way he always alerted. The two soldiers crept up along a little trail behind Andy and saw two machine gun nests, one of each side of the trail. The two handlers started shooting, Lansley threw two grenades and when it was all over, eight Japanese soldiers were dead. The wiping out of the machine gun nests by Andy and the two handlers permitted that entire sector of the line to move forward.

"Otto" and "Rex" warned there masters of Japanese snipers, and located their gun positions. 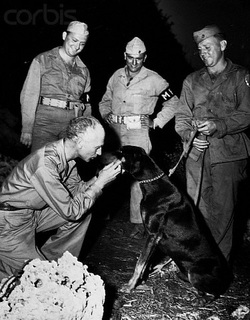 Rex, a two-year-old Doberman scout dog forewarned his group of Marines of the presence of Japanese soldiers during the night. They were ready and waiting when the attack came at dawn and successfully repelled it! Rex was handled by PFC William N. Hendrickson and PFC Charles Foist.

Another scout dog, a four year old Doberman named Otto, while working ahead of a reconnaissance patrol, warned the Marines of a Japanese machine gun position located 100 yards away. This gave the Marines time to disperse and take cover before the machine gun opened fire. The two handlers were PVT Martin R. Troup and PFC Henry L. Demault.

Many of our soldiers were saved by these fearless dogs. 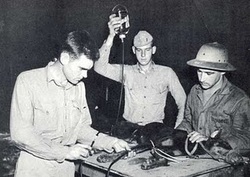 During the Guam campaign, 14 dogs were killed in action and ten more died from exhaustion, tropical maladies, heat stroke, accidents, and anemia from hookworm. All were buried there on Guam, at what was to become the first War Dog Memorial years later.  In August 1945, the Marines began to close the War Dog Training School and to disband the War Dog Platoons.  Some of the Dobies, after retraining, were sent home to their original owners, some went home with Marine handlers and a number of them were destroyed because no one wanted them.

The Devil Dogs served with valor in our history, but unfortunately, their stories have been overlooked and their sacrifices have been all but forgotten.